Let’s begin with an analysis of interval classes. Start the MeloSpyGUI, select your data and go on to the process tab. First of all, choose Interval in the list of features, secondly FUZZYINT_FEATURES, and all the available features from fuzzy_int_01 to fuzzy_int_09 (Fig. 1). On the right, you can see short descriptions of each feature: ascending interval steps of 7 semitones or bigger are labelled as big jump up, of 5 to 7 semitones as jump up, of 3 or 4 semitones (thirds) are called leap up, and so forth (see trans_fuzzy_intervals). 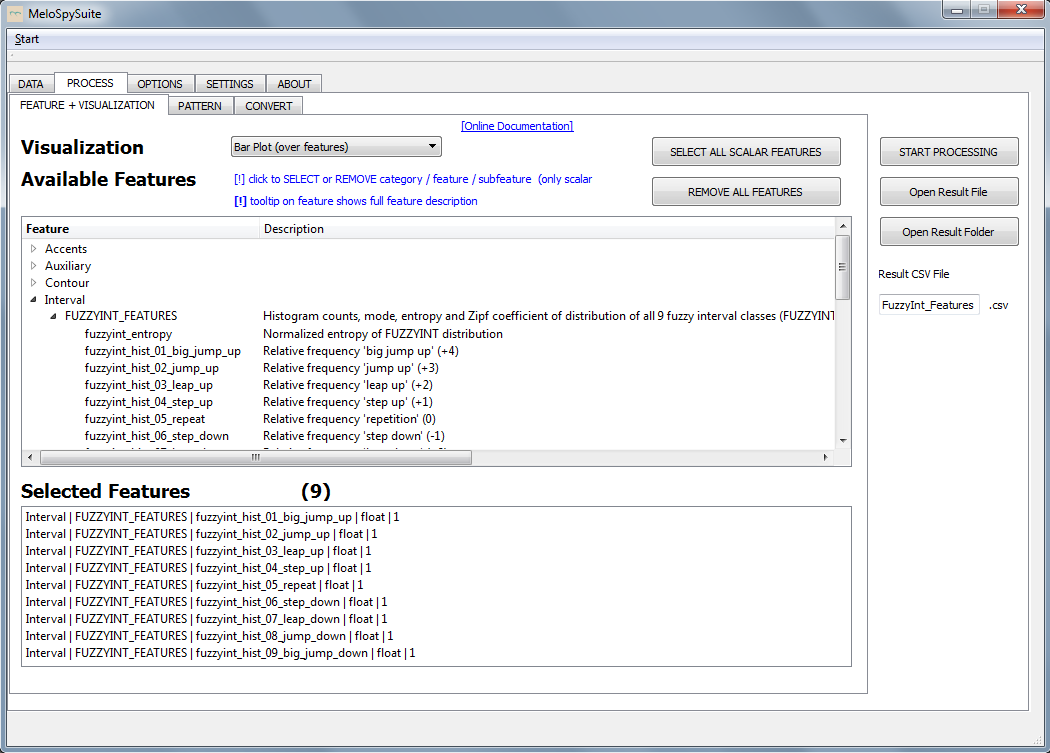 Using this set of features, you will get an overview of the intervallic structure of “Giant Steps”. Is Coltrane playing rather small intervals? Are big interval jumps of importance as well, what about tone repetitions? Start the analysis process and check out the histograms. When listening to “Giant Steps”, it becomes obvious that the tempo of the piece and the solos is very high. Thus, it can be assumed that Coltrane is rather focusing on small intervals. Continuously playing big jumps would probably be an issue, and such improvisational features might rather be found in slow balladic solos. The histograms confirm this impression (Fig. 2 and 3). 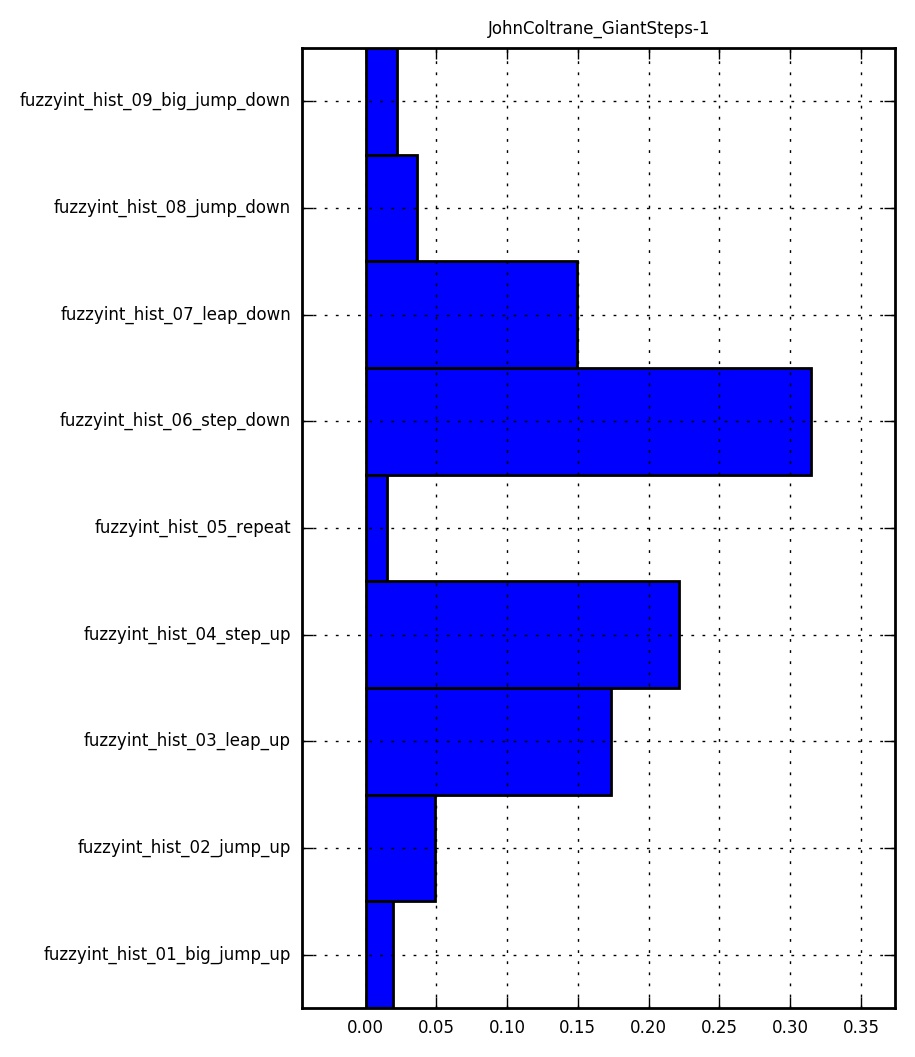 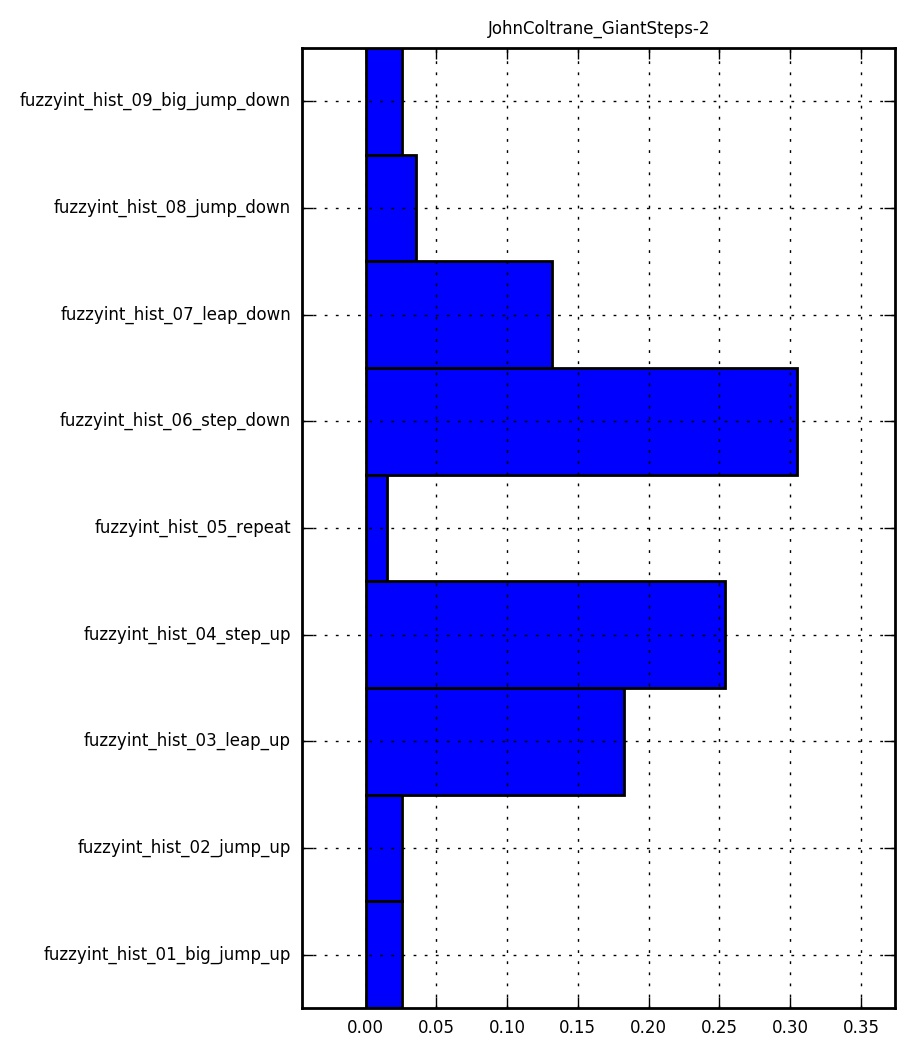 First of all, you can see that there is hardly any difference between the two Solos. Coltrane focuses on small steps or leaps up- and downwards. Jumps, big jumps or repetitions are occurring quite seldom (always five percent or less), and might also be caused, for instance, by the beginning of a new phrase. These results can already tell you a lot about the intervallic structures of the solos. If you want to know more about structural details, you can focus on features for describing the ratio of ascending and descending intervals, chromaticism, or arpeggios.

For instance, the ratio of ascending to descending intervals could be of interest. In this case, select PARSON_UP_DOWN_RATIO and ratio_acending_descending. Note: In this case, the results should be displayed in one single histogram, so you choose Bar Plot (over items) (Fig. 4). 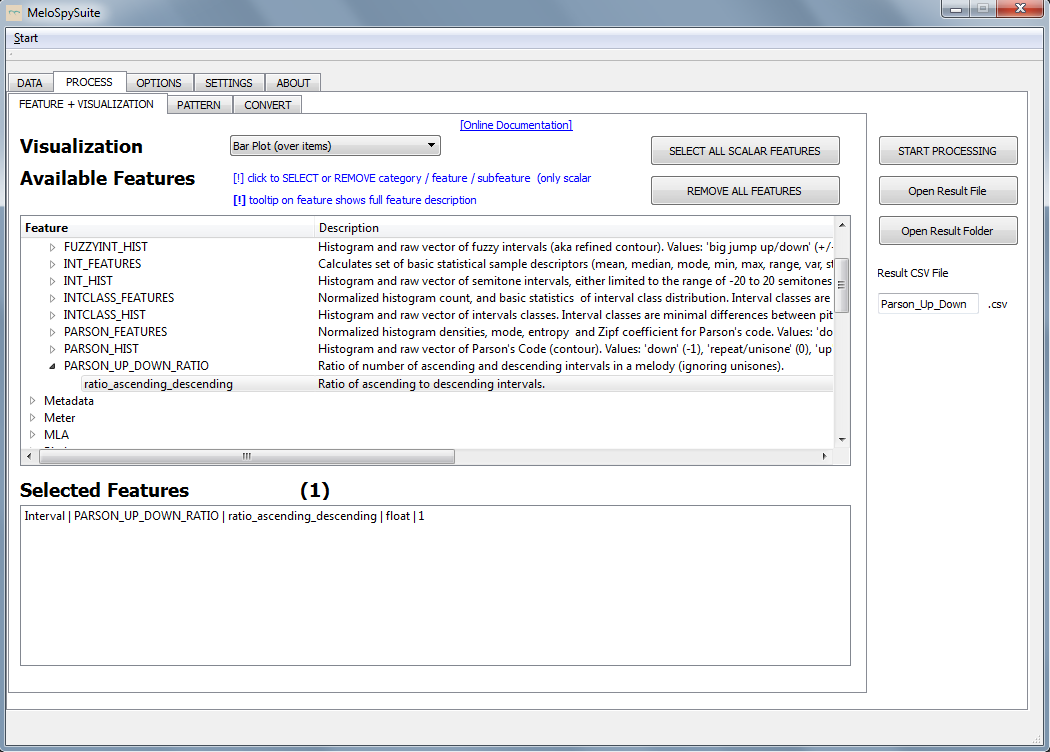 Fig. 4. Selection the feature “ratio of ascending to descending intervals”.¶

Especially in the second solo, the ratio is nearly 1:1 - there is no clear tendency to ascending or descending structures (Fig. 5). 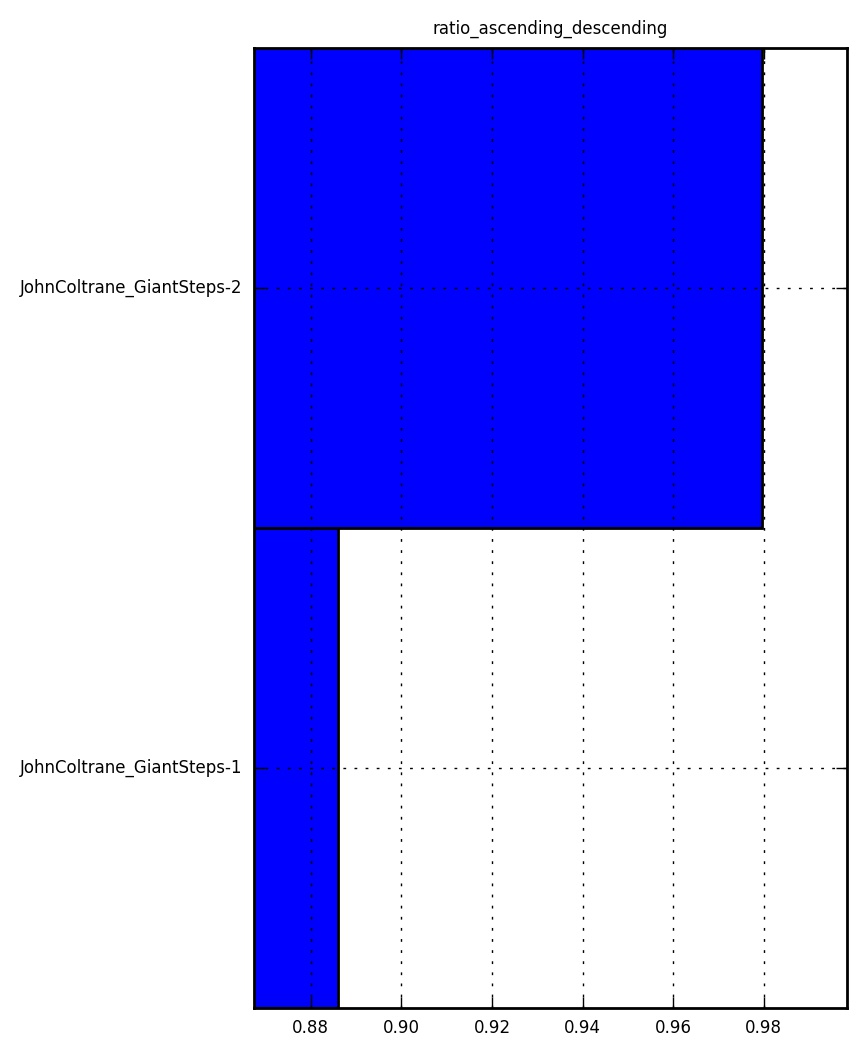 Furthermore, there are some options for analyzing chromaticism. On the one hand, you can calculate the percentage of chromatic passages in the two solos. In doing so, you must select Sequence/Interval and INT_CHROMATIC_SEQUENCES_RATIO (Fig. 6 and 7). 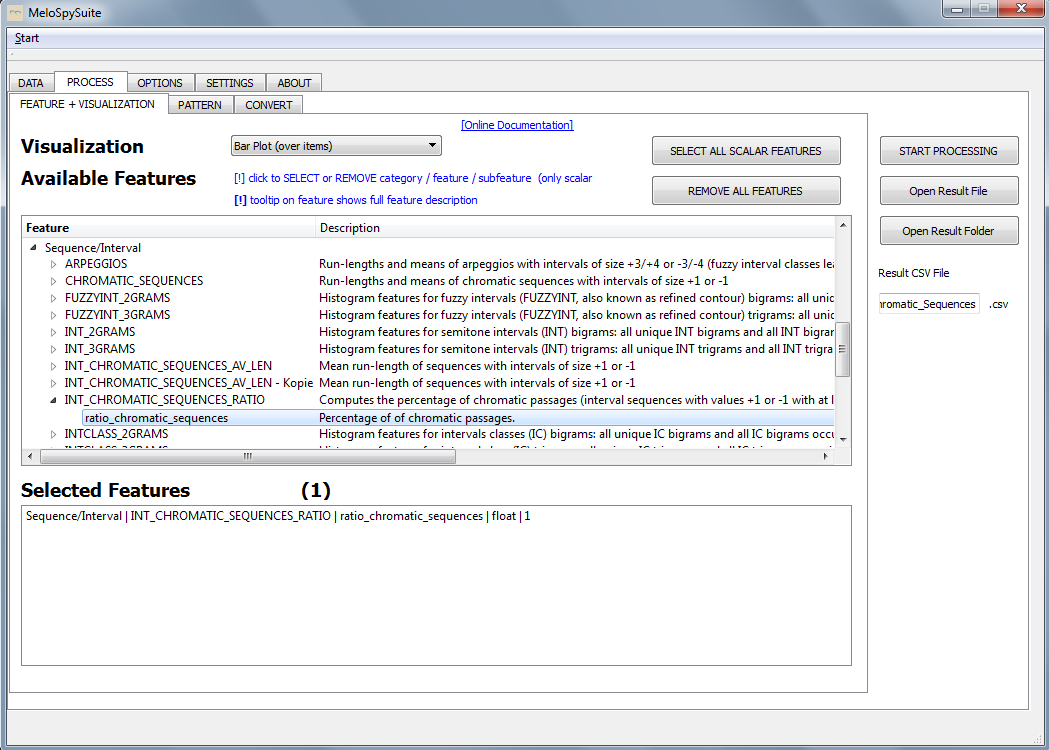 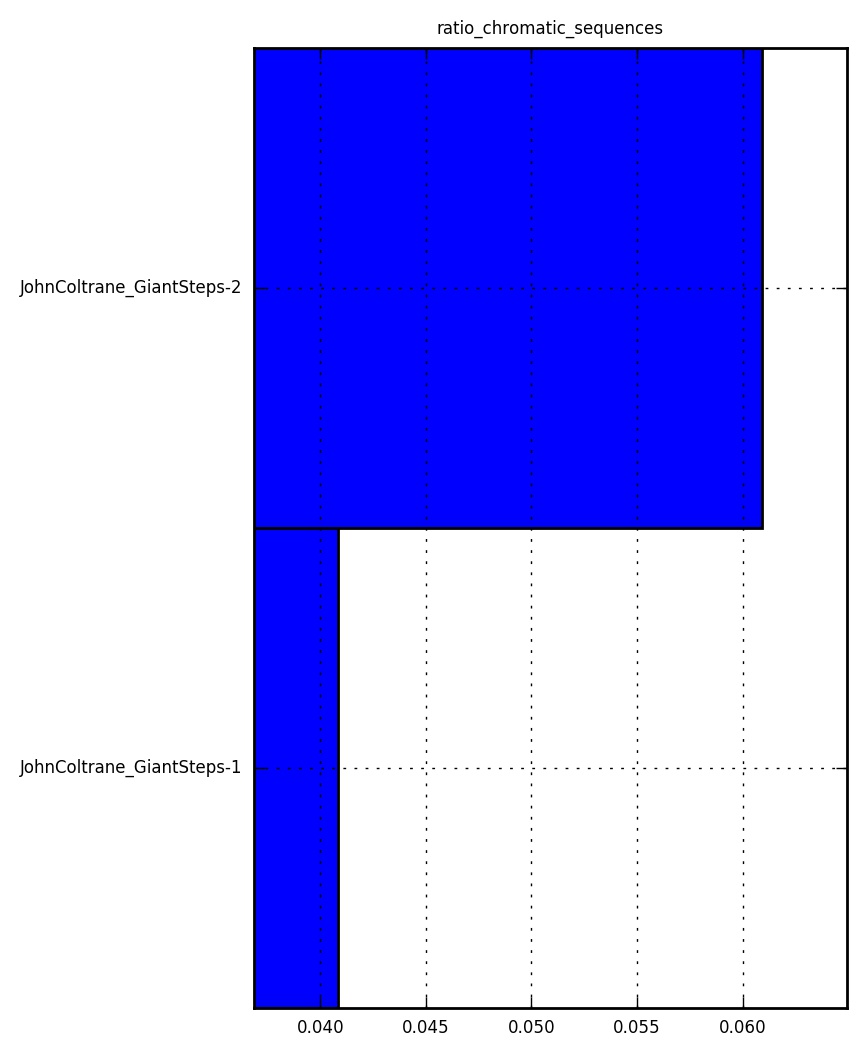 As you can see, Coltrane is rather avoiding chromatic passages, especially in the first solo. If you want to know more about the chromaticism, there is an option for comparing ascending, descending, and mixed chromatic sequences: CHROMATIC_SEQUENCES (Fig .8). 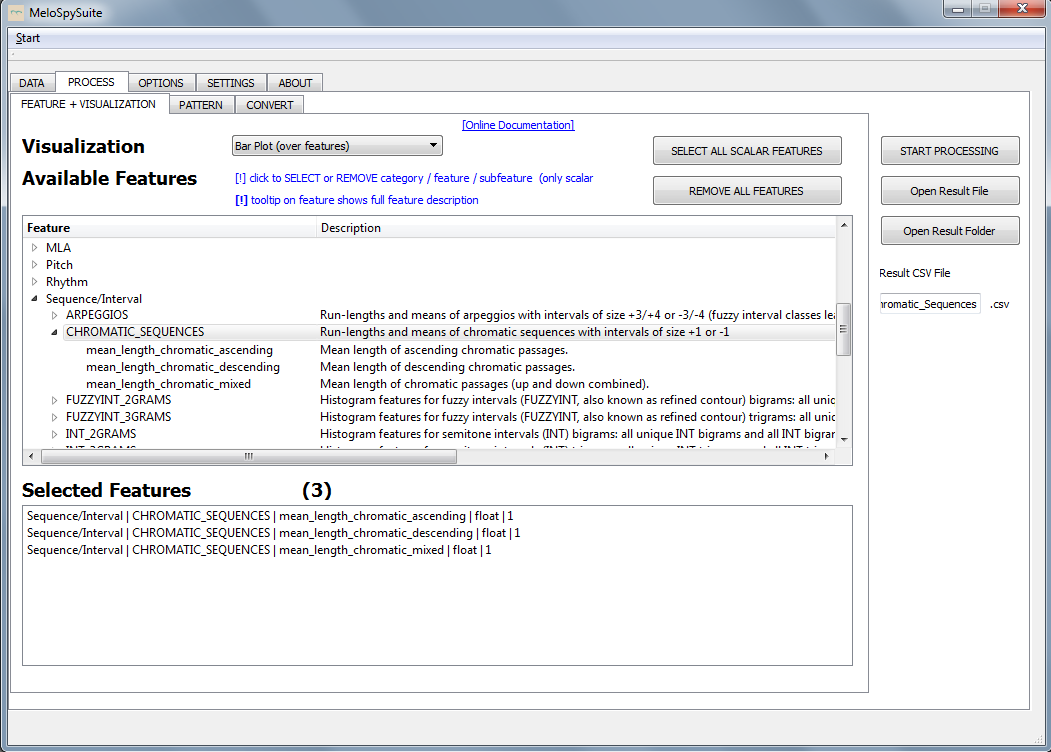 When comparing the histograms, you can see clear differences. While the passages are - on the average - no longer than four notes in both solos, Coltrane is obviously playing longer chromatic lines in the first one - even though there are less chromatic passages in general (Fig. 9 and 10). 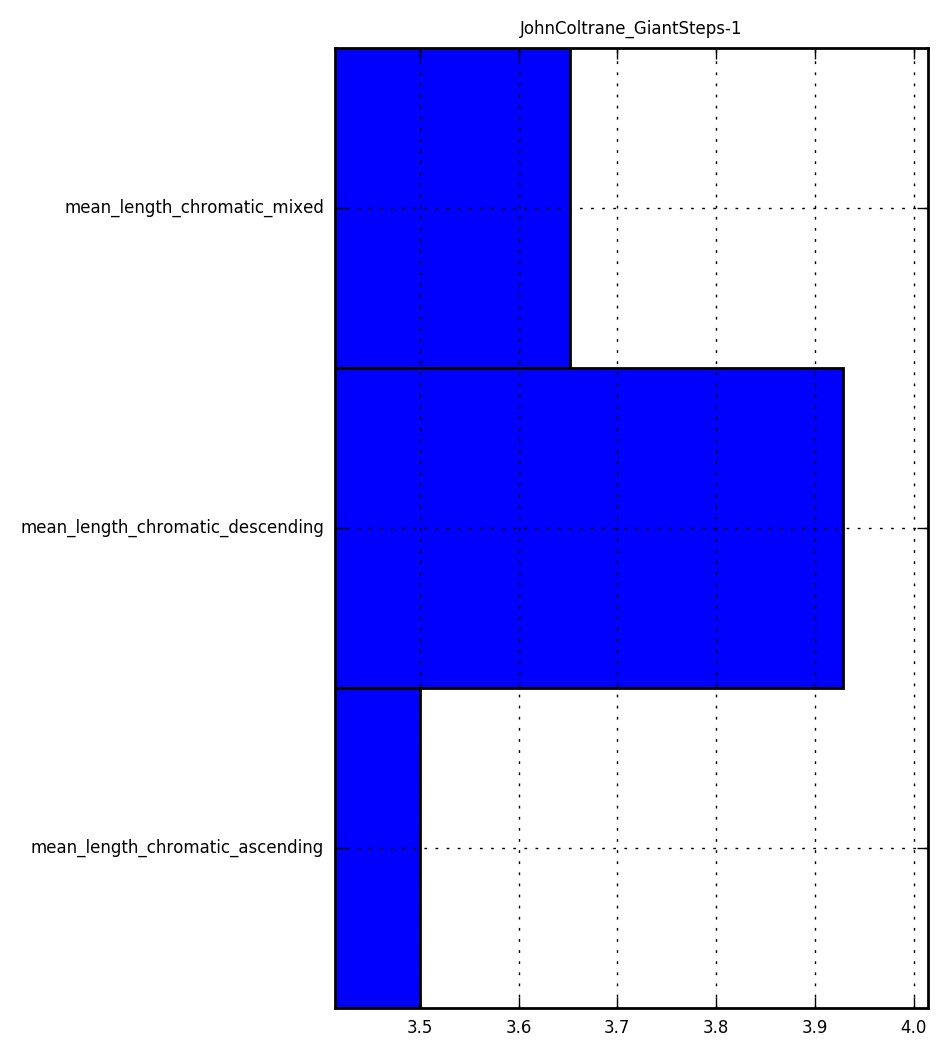 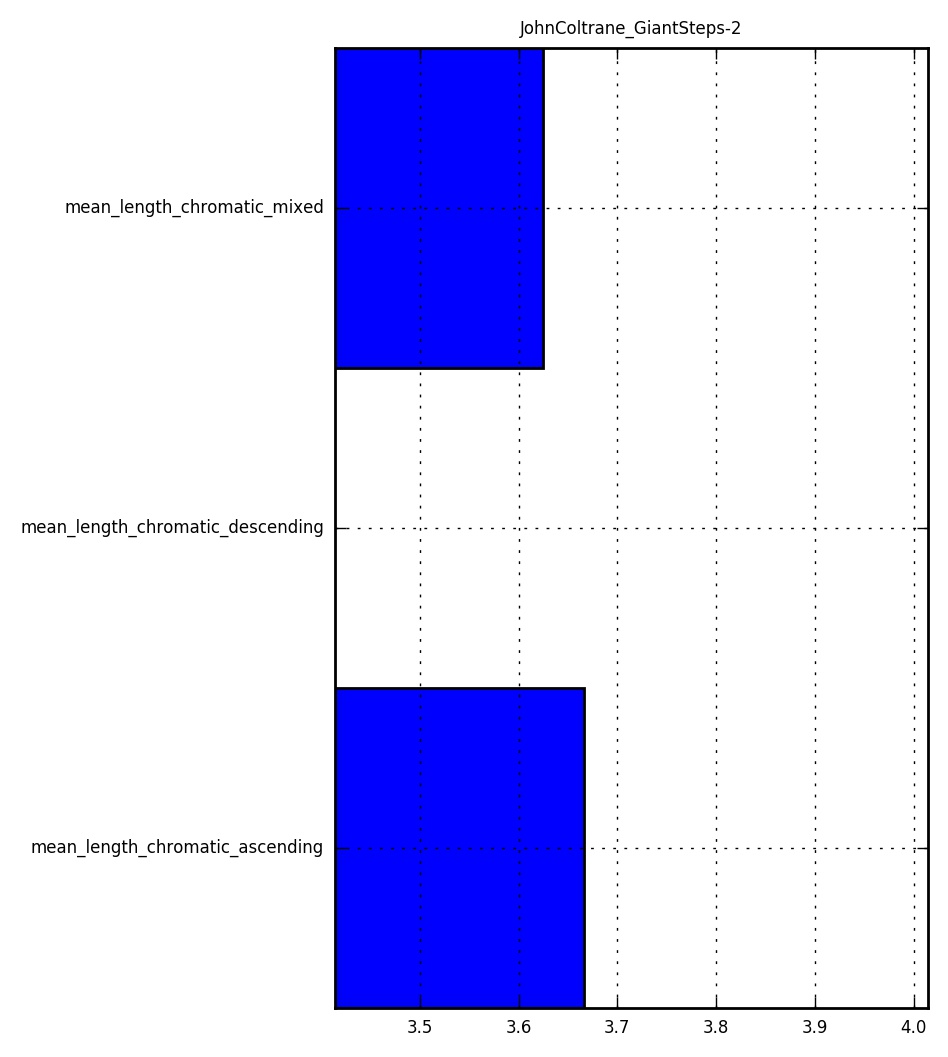 Arpeggios can be explored in a similar fashion. Choosing ARPEGGIOS and the three sub-features, the mean run-lengths of arpeggios will be analyzed - only intervals of +3/+4 or -3/-4 will be taken into consideration (Fig. 11). 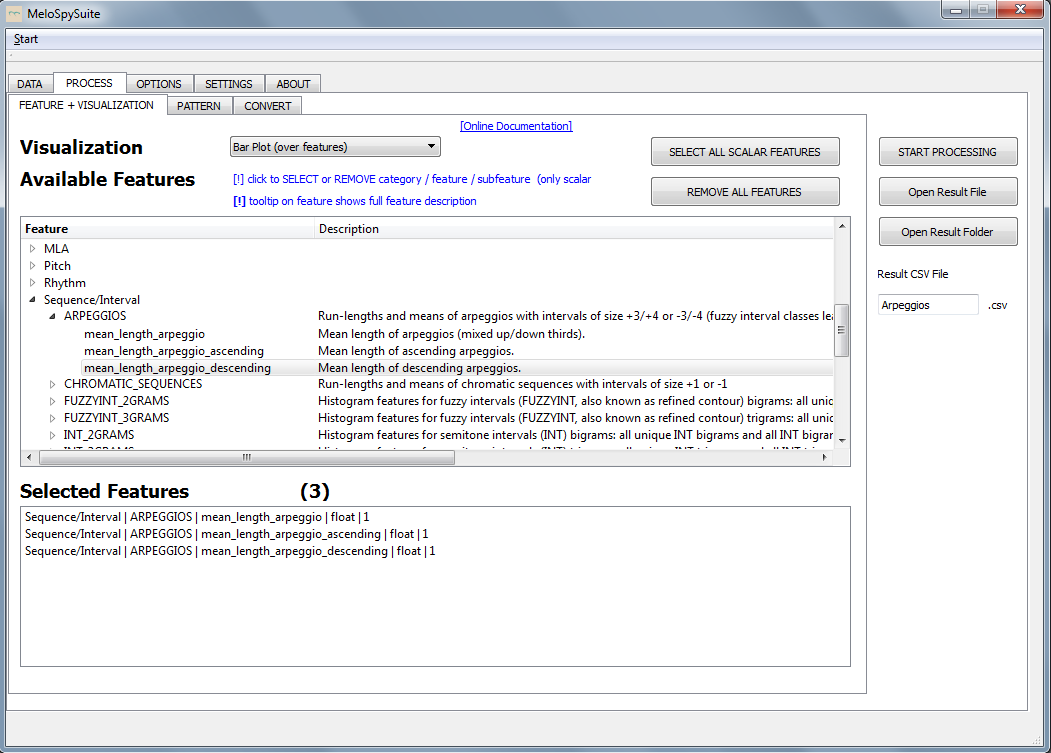 The main difference between the two solos concerns the mean length of descending arpeggios in the first solo (Fig. 12 and 13). 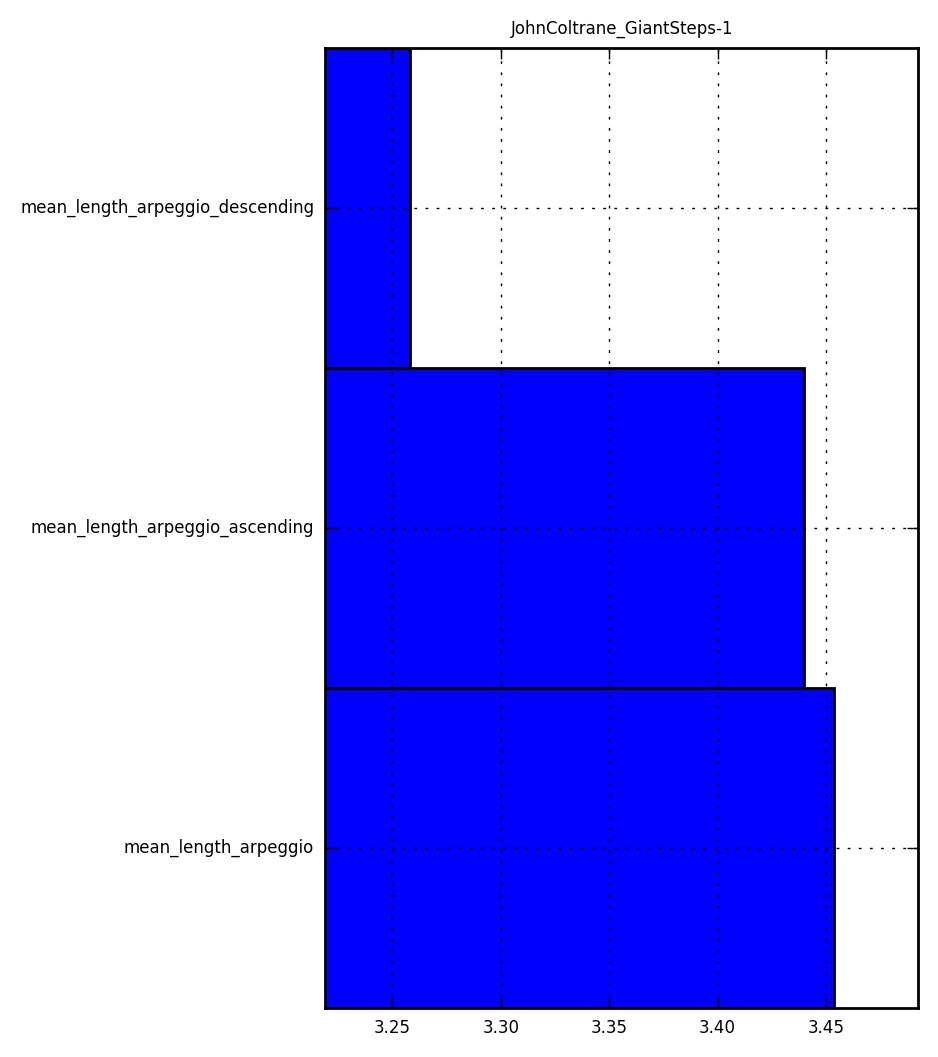 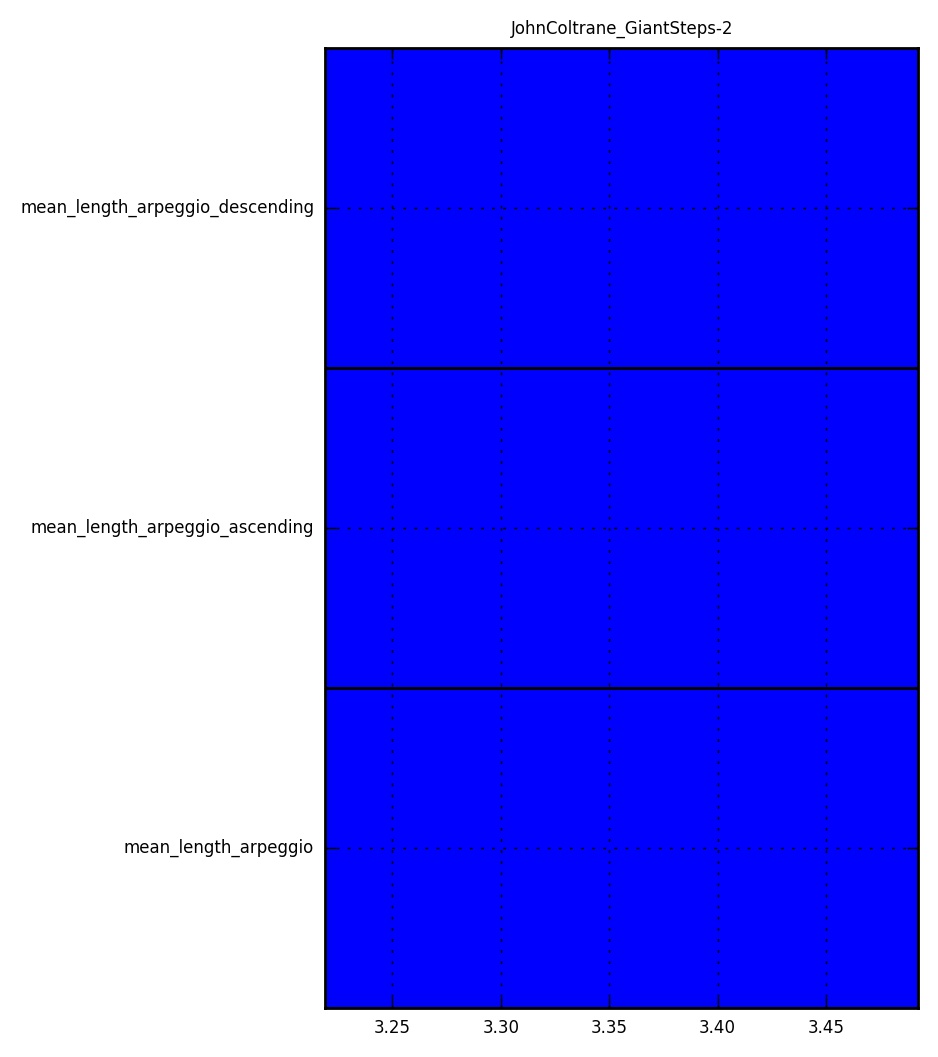 In summary, there are clear similarities with regard to the intervallic choices in Coltrane’s two solos. Differences can mainly be found when analyzing chromatic sequences or arpeggios. In the next step, you can explore some of the features for an analysis of rhythm. Again: in case you need further information regarding the analysis of intervals, see here.