In this part, the focus will be on the rhythmic analysis of John Coltrane’s solos on “Giant Steps” (1959). Again: if you need basic information about the functions of the MeloSpyGUI, please check out our previous tutorial. The MeloSpyGUI allows you to investigate rather basic rhythmic features such as note durations, but offers options for analyzing, for instance, microrhythmic details as well.

Let’s begin with the durations of notes, so please select Rhythm and DURCLASS_FEATURES in the list of features. There are ten relevant options for your analysis: each five categories from very short to very long labelled as absolute and relative (Fig. 1). 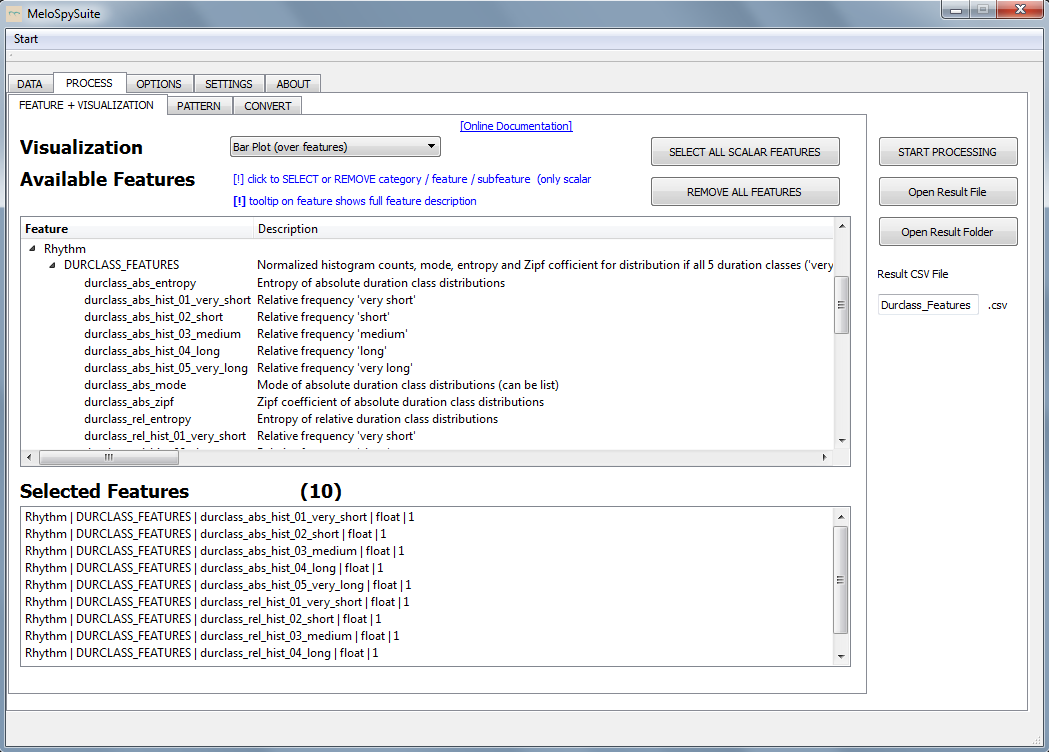 Absolute means that the reference duration is always 0.5 seconds; if you choose Relative, the duration class refers to the beats manually annotated for the transcriptions of the Weimar Jazz Database. These features provide a basic overview of the note durations in monophonic melodies. Select all ten features and compare the results for both solos (Fig. 2 and 3). 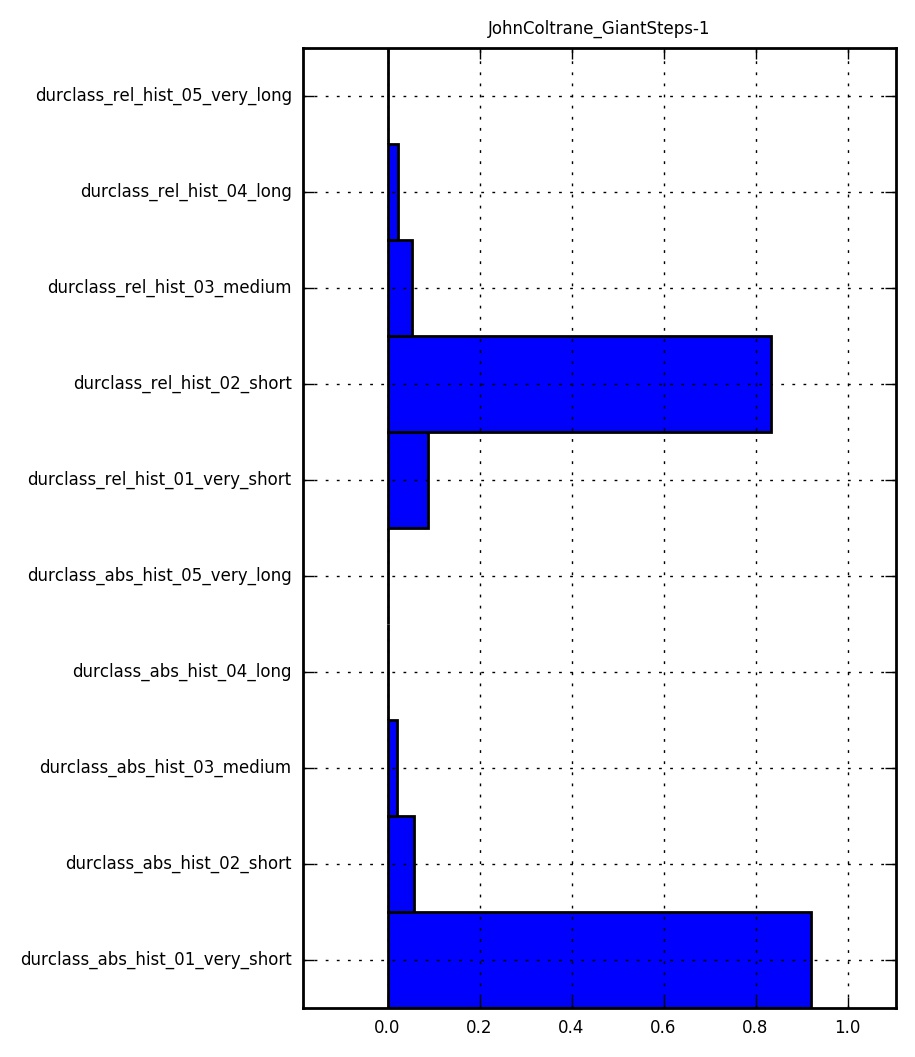 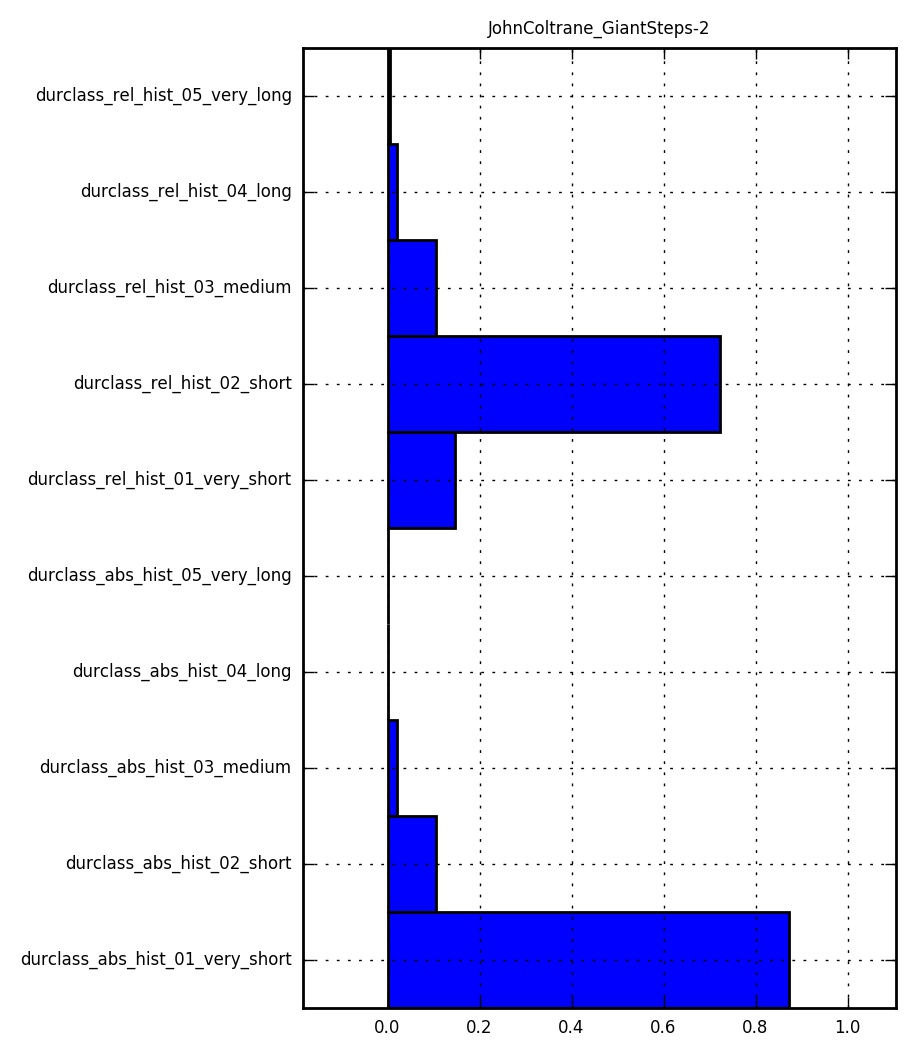 First of all, the histograms look quite similar, and most of the duration classes in both of Coltrane’s solos can be described as short or very short. Secondly, relative to 0.5 seconds the majority of notes are labelled as very short, but short in reference to the beats, indicative of the high tempo of about 280 bpm.

You can analyze the inter-onset intervals in a similar fashion. In a musicological sense, the term inter-onset interval (IOI) describes the duration between two single tones or rhythmic events - it does not refer to the actual sounding duration of these musical events. Select IOICLASS_FEATURES and repeat the work steps described in the previous paragraph (Fig. 4). 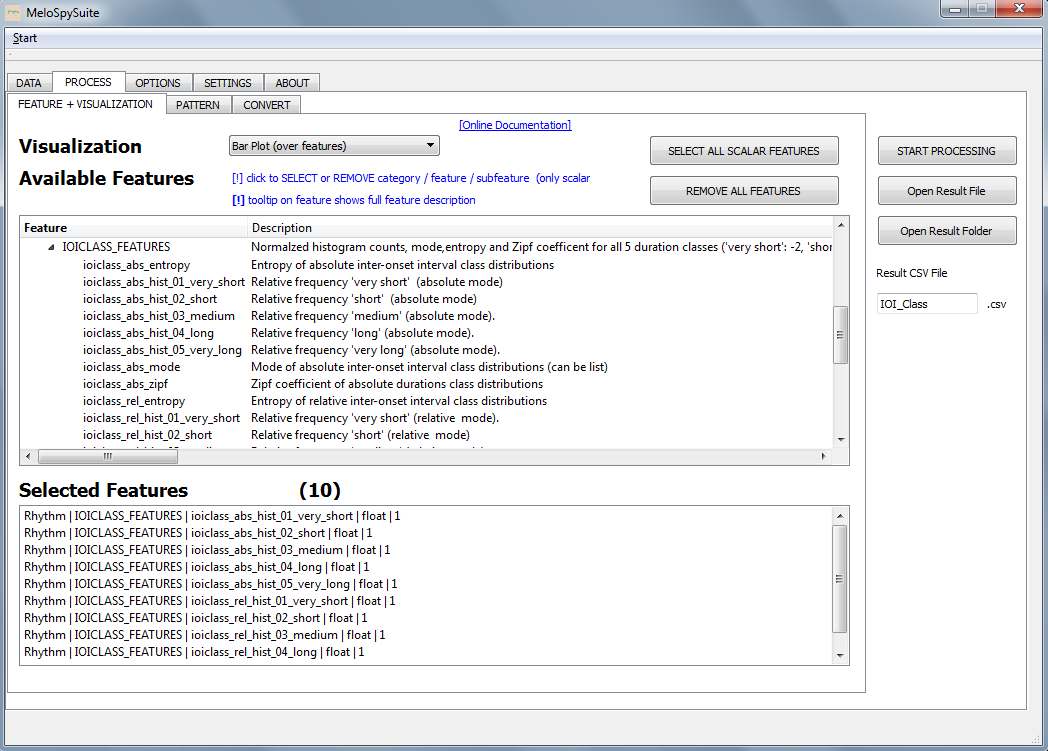 The results are quite the same as regarding the duration classes. In reference to 0.5 seconds, most of the IOIs are very short, and short in reference to the beats (Fig. 5 and 6). 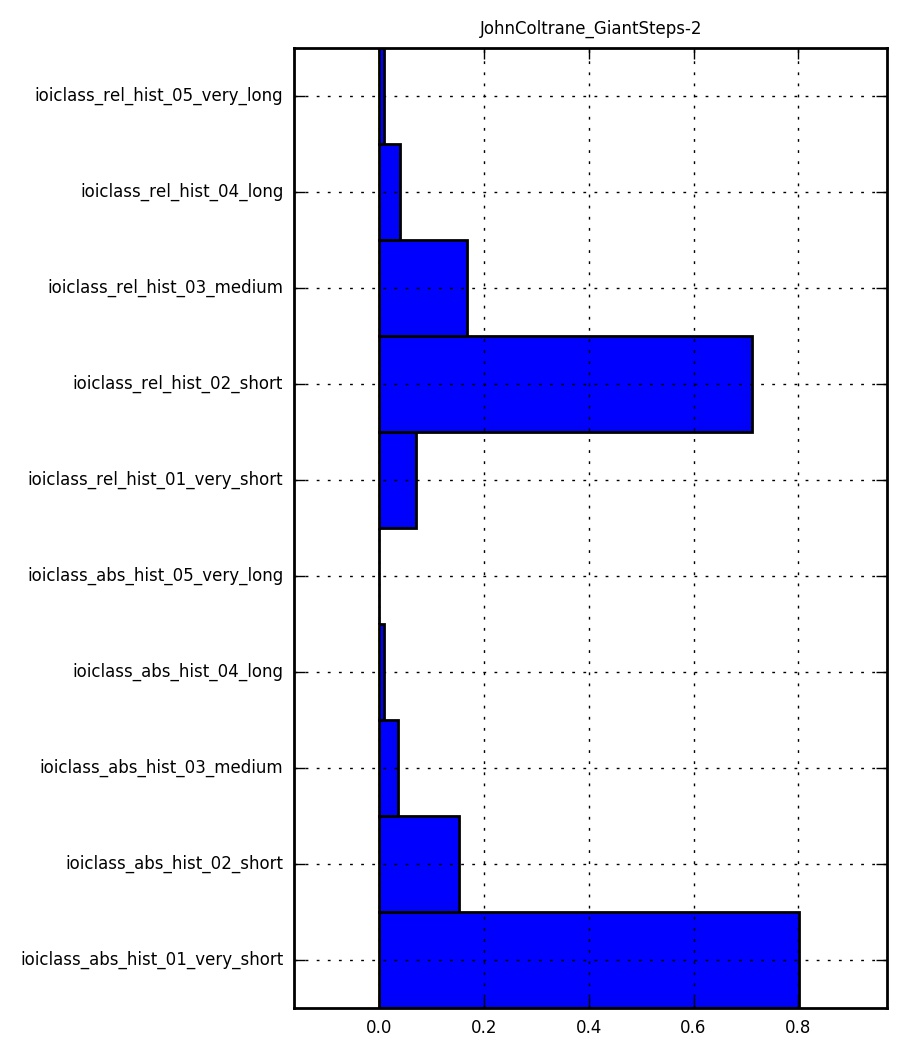 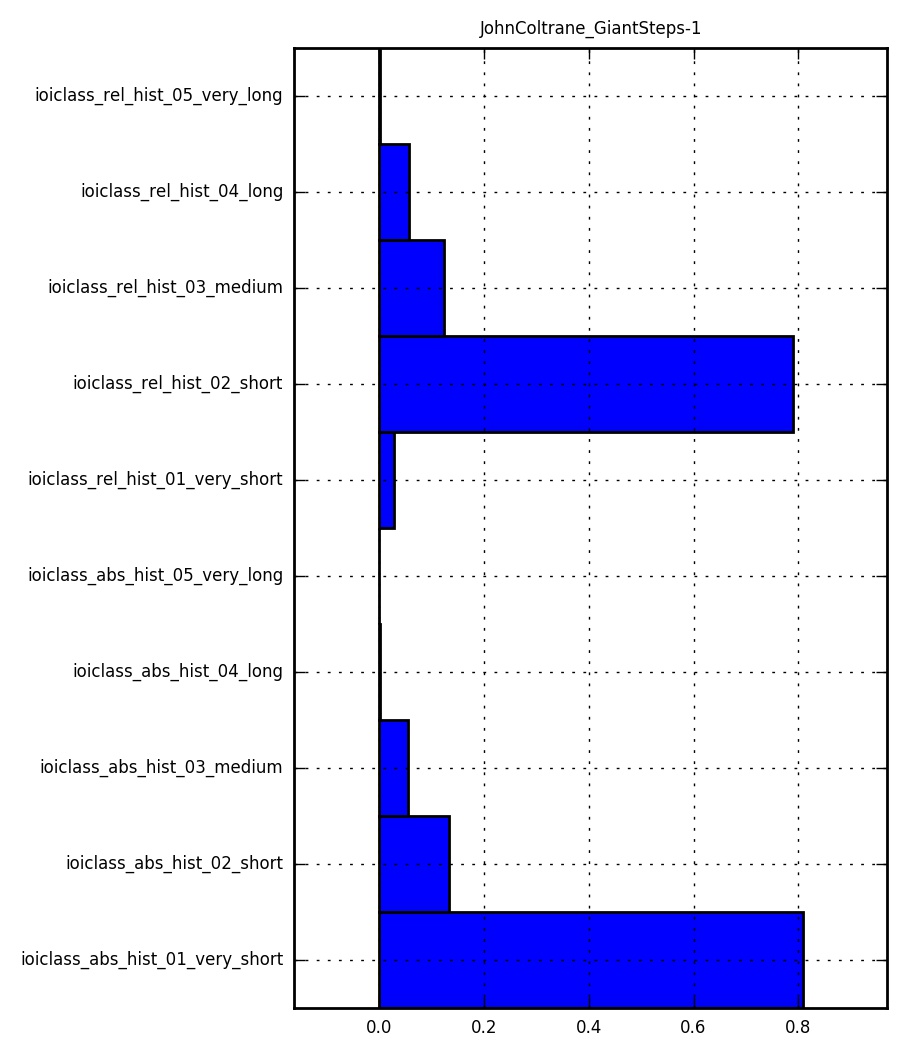 Since the tempo of “Giants Steps” is pretty high and Coltrane constantly improvises fast melodic lines, these results are not very surprising. If you want to know exactly how many notes the saxophonist plays per bar or second, there is one adequate option: GENERAL_EVENT_DENSITY. By selecting event_density, and metrical_event_density, you will get the information you need (Fig. 7). 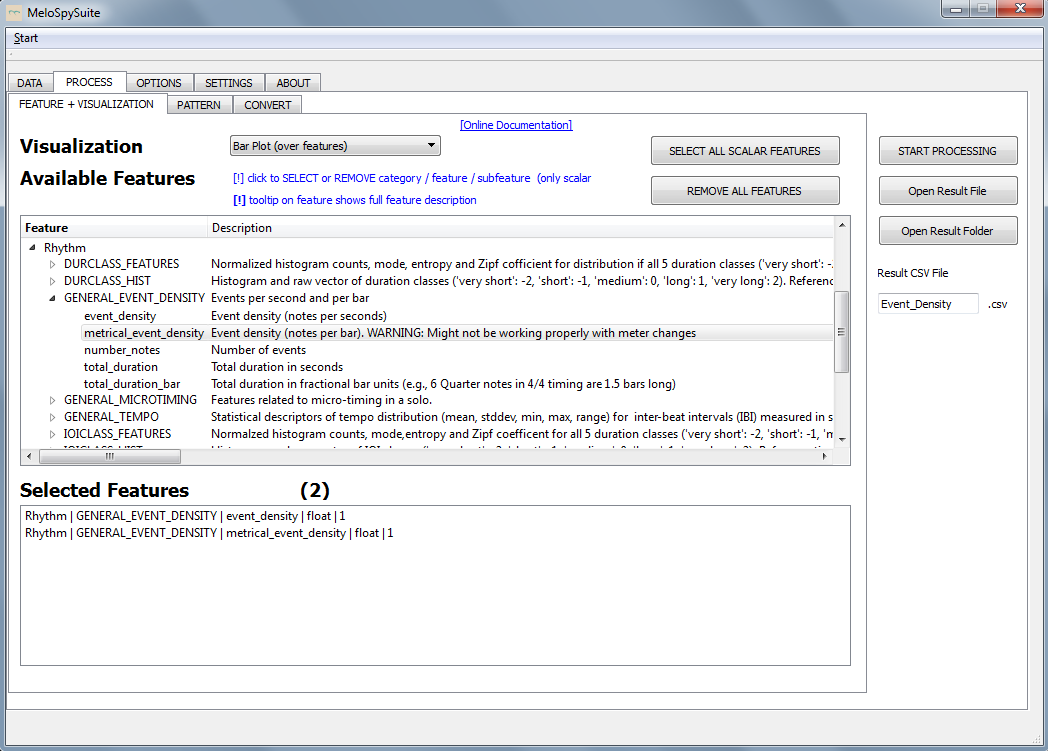 Once more, the results are pretty similar for both solos. Coltrane plays approximately 6.3 notes per bar, and approx. 7.6 to 7.9 tones per second (Fig. 8 and 9). 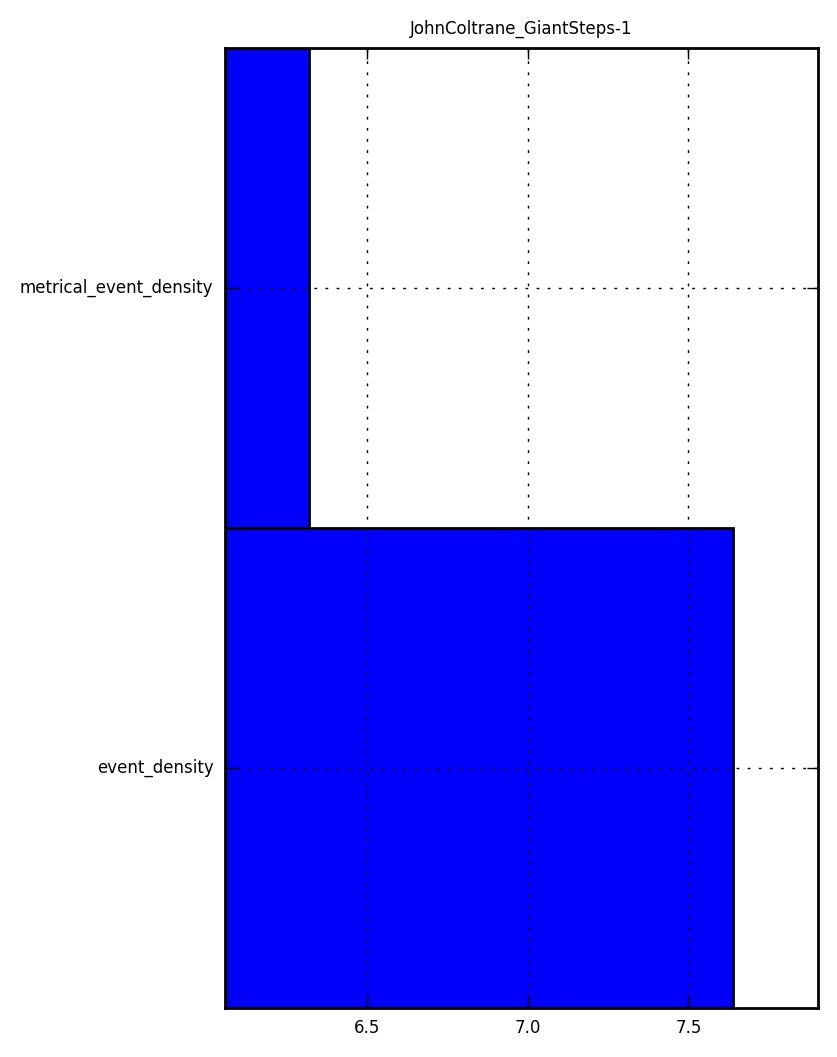 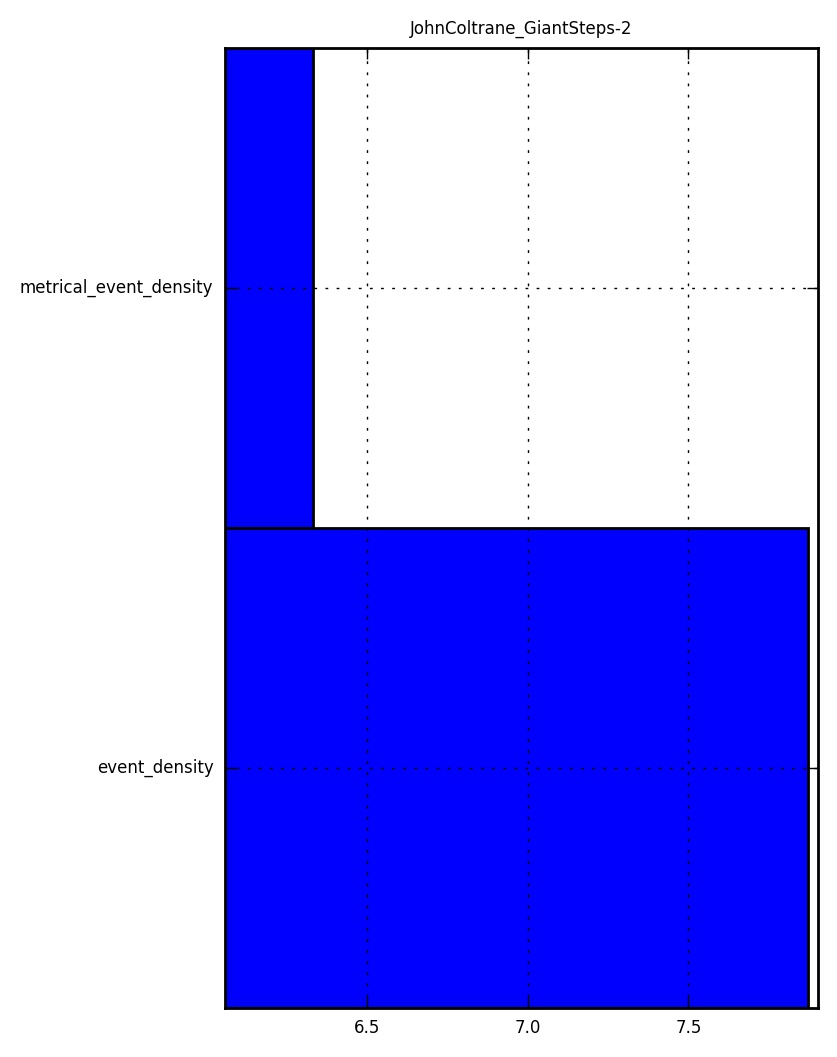 The MeloSpyGUI also offers the opportunity to analyze syncopicity. In doing so, you have to switch to Meter, select METER_RAW, and syncopicity (Fig. 10). 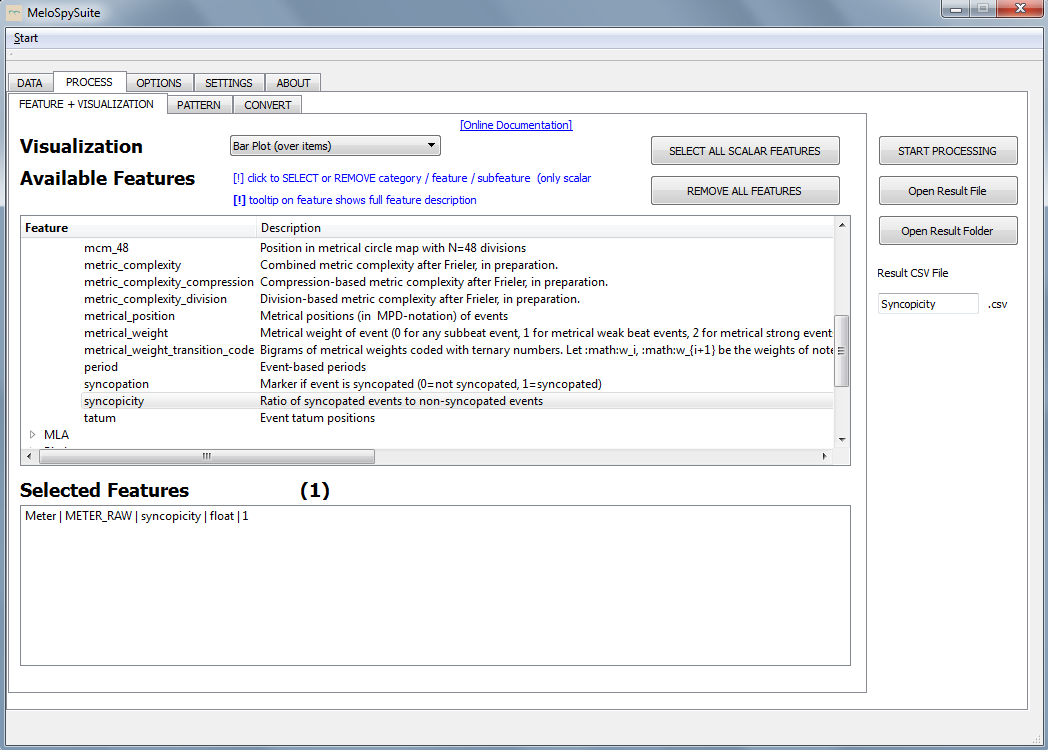 The results will tell you more about the proportion of syncopated events in all events. As the histogram shows, Coltrane’s syncopicity clearly increases in the second solo (Fig. 11). 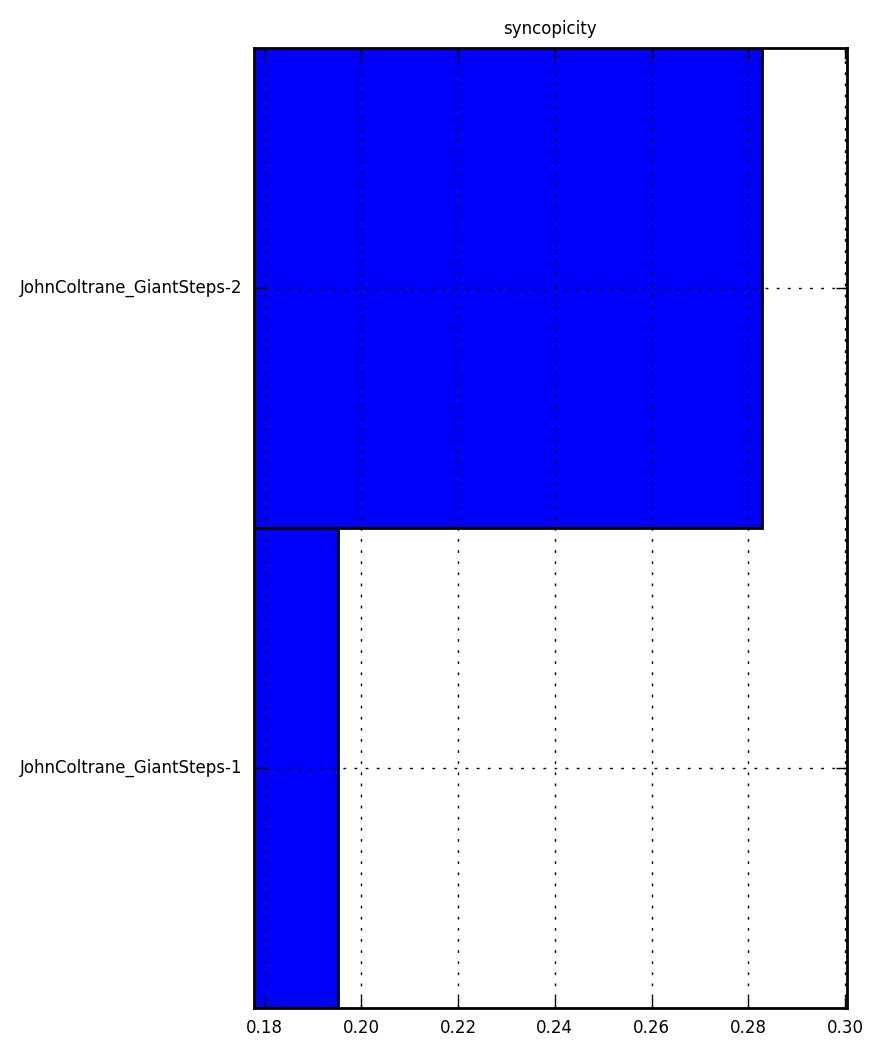 Finally, you will check out the features for an analysis of Coltrane’s microtiming in “Giant Steps”. Go back to Rhythm, and select GENERAL_MICROTIMING. Of interest are the options mean, median, and std (standard deviation) for both swing ratio and swing shape. Swing ratio stands for the duration ratio of two eighth notes. The ratio of binary eighths is 1:1, whereas the ratio of swing or triplet eights is rather 2:1. But the ratio is pretty flexible and is variied expressively by musicians. Swing shape, on the other hand, stands for the loudness difference between each first and second eighth note. Let’s select the six options mentioned above (Fig. 12). 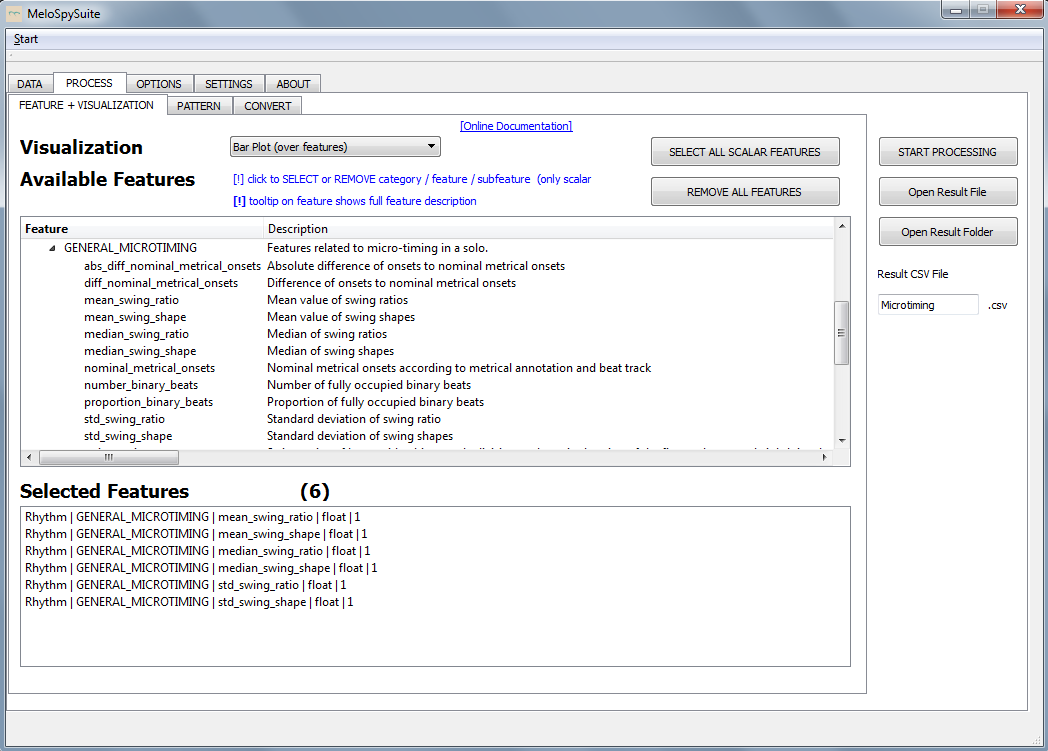 The graphics show that the results for both swing ratio and swing shape are pretty low. That is, Coltrane plays very regularly, probably due to the high tempo. However, you also have to take into account that the standard deviation of the swing shape is rather high. Hence, it could be interesting to compare single choruses or phrases of the solos (Fig. 13 and 14). 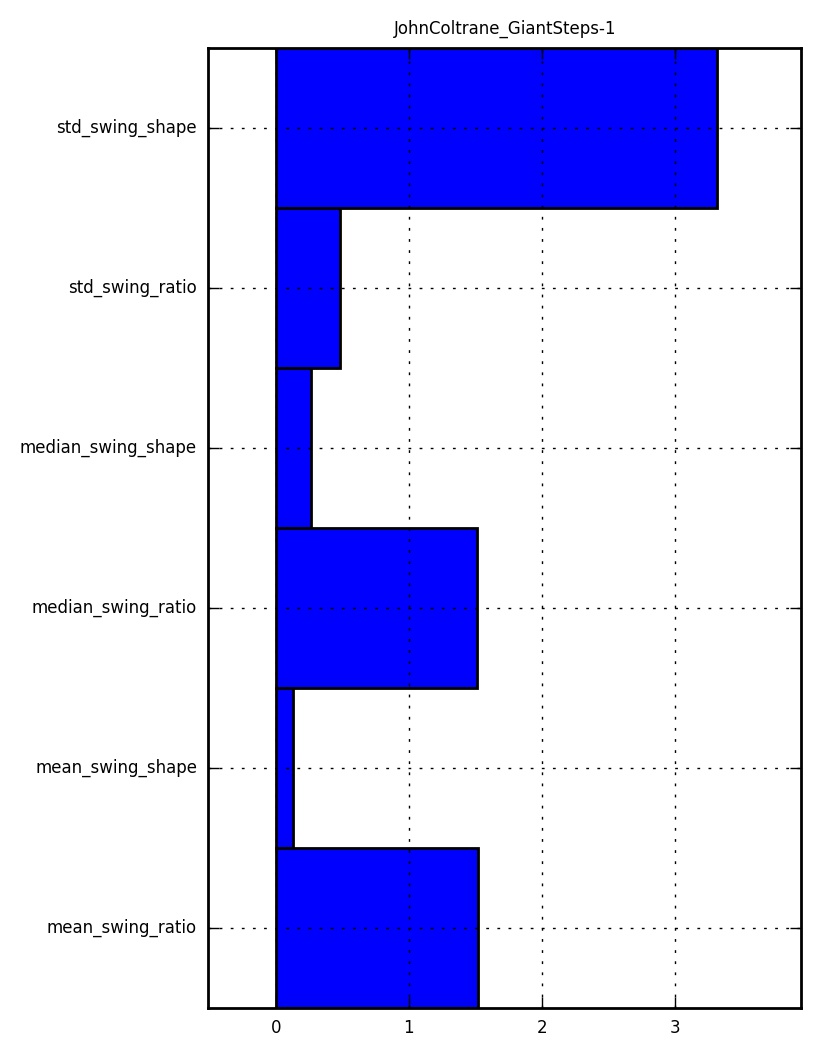 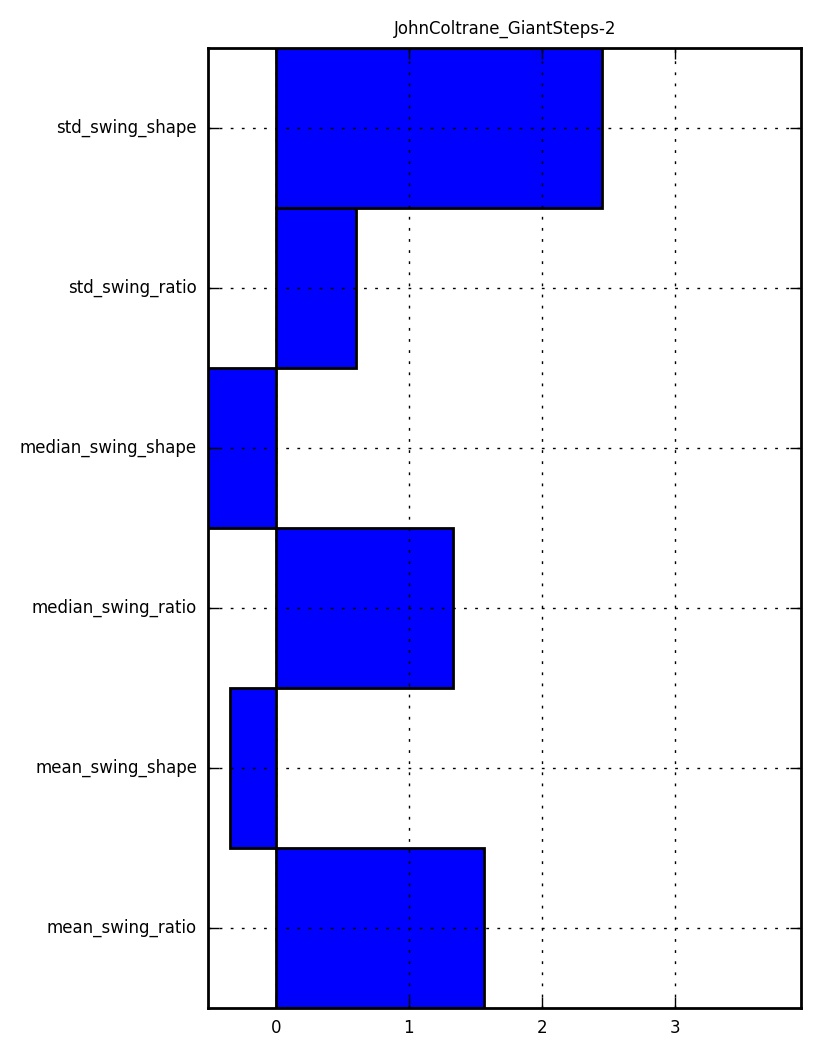 Besides analyzing these rhythmical details, it might be of interest to explore the choices regarding metrical positions in Coltrane’s solos. In doing so, switch to Meter and select METER_RAW. There is one option labeled as mcm_48: mcm stands for Metrical Circle Map, each beat will be subdivided in twelve units. When selecting this option, you will get the information you will need for further metrical analysis (Fig. 15). 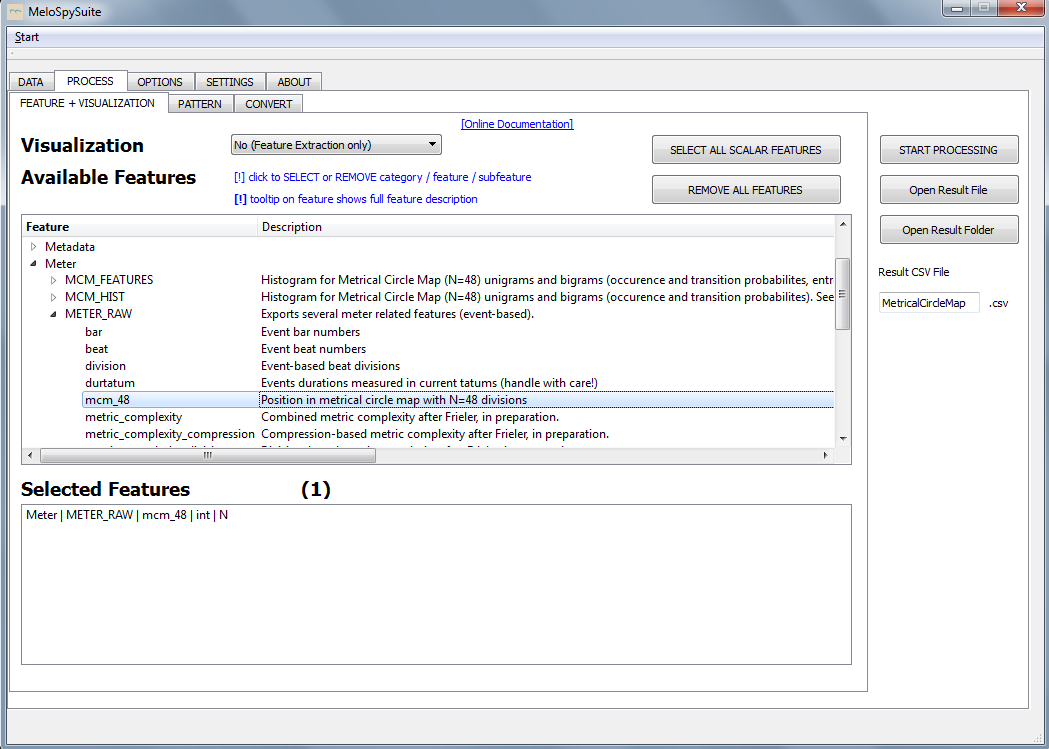 The information will be listed in a csv-file and can be used for statistical analysis, e.g. using software like Excel, R, or SPSS. In this case, the histograms were generated with R. The results show that there are no conspicuous differences regarding the metrical positions. In the second solo, Coltrane rather emphasizes 4, whereas in the first solo it is 3+ - but in general, there are only small differences (Fig. 16 and 17). 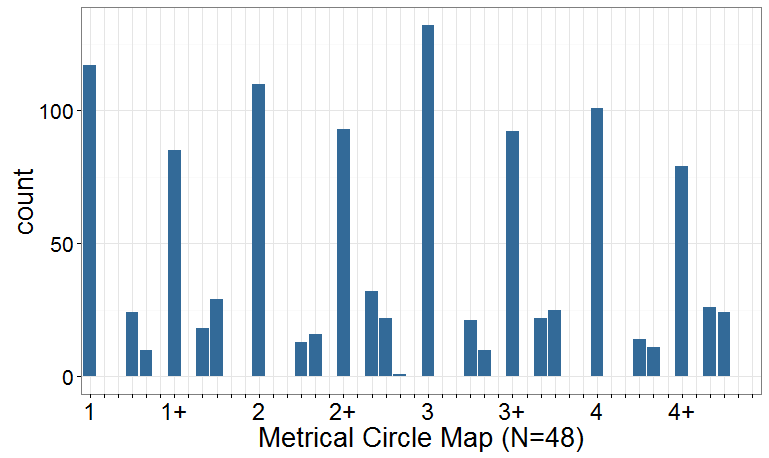 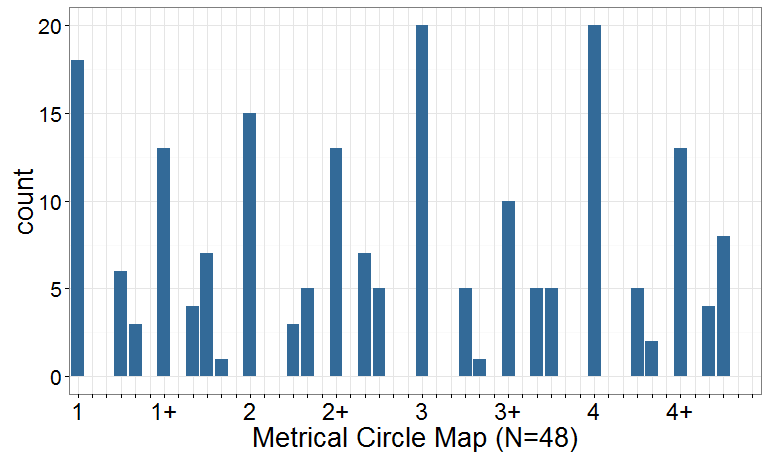 After reading this tutorial, you should be prepared for further investigations of rhythmicity in jazz solos or in any other monophonic melodies with the help of our software. In the next part, the focus will be on the pattern search tools of the MeloSpyGUI. For more detailed information about the analysis of rhythm and the available features see here.